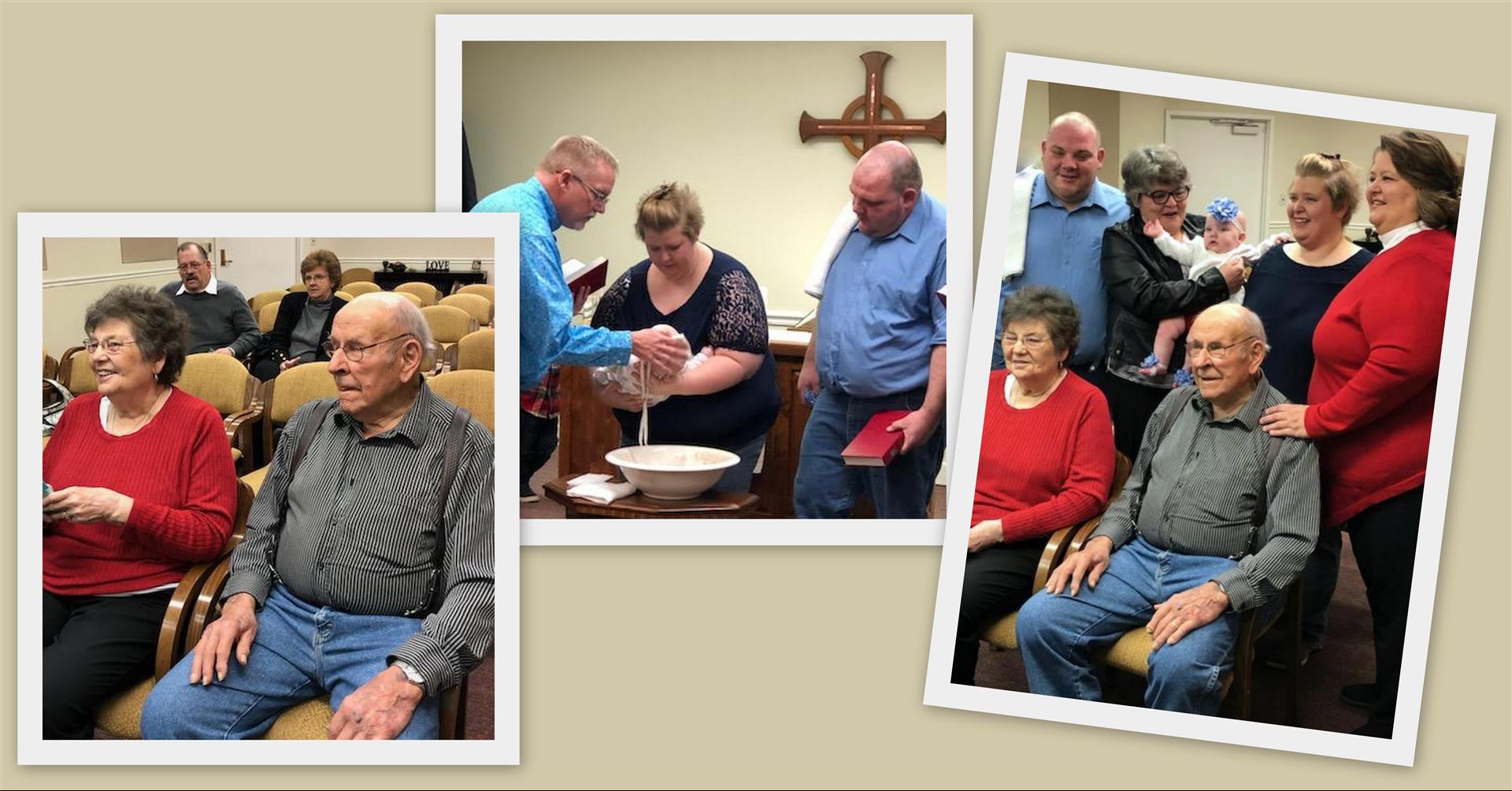 In January, an infant baptism took place in the chapel of Salina Presbyterian Manor.

Residents Donald and Dannie Tillberg were present to welcome their great-granddaughter, Finnley Grace, into the baptismal covenant.

“Some pastors don’t like doing baptisms outside of church,” said Chaplain Mary Bridges, who helped organize the special service. “But to be able to have the family there is the most important thing. And it’s a close-knit family; grandma and grandpa are really important.”

It was the first baptism in a senior living community for the Rev. Kent Happel of Immanuel Lutheran Church, the Tillbergs’ longtime congregation.

Finnley’s parents, Sara and Jeff Duncan, had originally planned to baptize their daughter in November at Immanuel Lutheran. However, they postponed the service when Dannie was hospitalized.

Even after she returned home, it became clear that Dannie might not be able to attend a church baptism, so the baptism came to Presbyterian Manor.

“It was a way for Don and Dannie to be a part of it,” said Pastor Kent. “They’re the matriarch and patriarch of the family.”

The sacrament took place at 2 p.m. and included music from the Lutheran hymnal, a stock of which Pastor Kent brought with him.

Dorothy Carmichael served as the pianist for service as well as another connection to the family’s faith tradition. Dorothy’s late husband, the Rev. Ken Carmichael, served as a pastor at Immanuel Lutheran. He baptized Finnley’s mother Sara 31 years ago.

The baptism was followed by a brief reception and the regular 3 p.m. Sunday service. Pastor Kent stayed to preach the sermon.

Like many ministers in the Salina area, he has participated in services at Presbyterian Manor before. Mary likes to invite local clergy to preach, especially if they already have ministered to residents.

For Mary, Finnley Grace’s baptism was another way to serve the faithful at Presbyterian Manor.

“One of my goals is to keep people connected to their home congregation as much as possible,” Mary said. “Their faith community is so important.”

Posted on
March 29, 2020
by
Cindy PMMA
filled under
Spiritual Life
Residents
Family
« Back to Blog