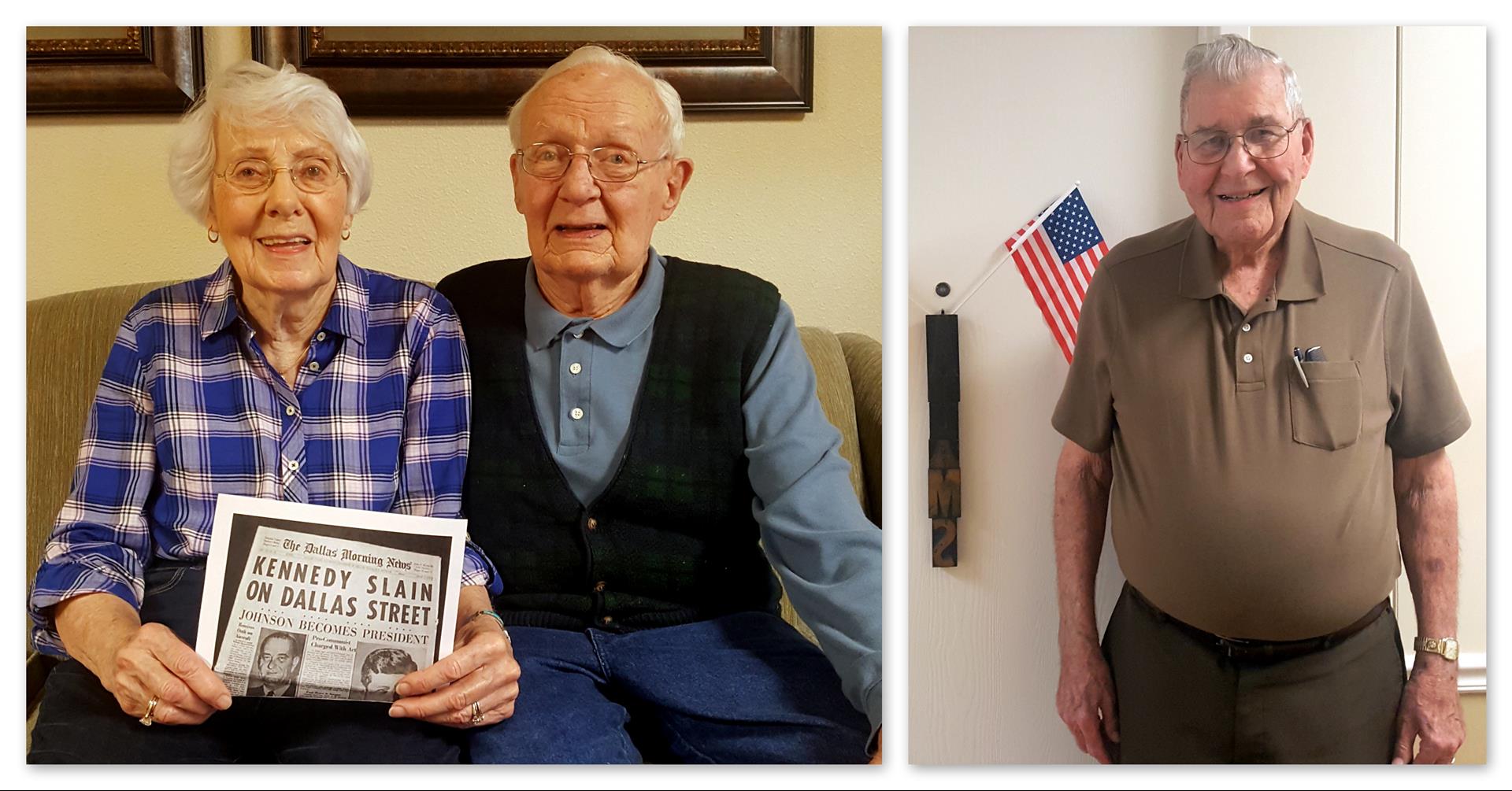 I remember where I was when …

We’ve all experienced significant historical events in our lifetime—some leave a lasting impression that allows us to recall exactly where we were when we first heard the news. The following memories are how some of our residents remember historic events that have happened in their lifetime.

“When JFK was assassinated, I was in McAllen, Texas. I was 39. My wife, Mary, and I were on vacation in our fifth wheel. We were at the administration/recreation building at the campground when someone came in and told us. I was just surprised. It didn’t make sense. The next few days everyone just talked about it.”

“I was in Branson, Mo. We were ready to go to breakfast and had the TV on in our motel room across from Wendy’s. We were glued to the TV for quite a while. When the first plane hit, we thought it was an accident. When the second plane hit, we heard it was a terrorist.”

“We were married five years and had table model TV, 17 inches in our living room. It was on Channel 10 – Lincoln. We lived in Marysville, Kan. The only channels we got were channel 10 in Lincoln. It was always full of snow, but the audio was good. It gave us a lot of good laughs. We knew about the actress Lucille Ball previously.”

“I remember my son, Arthur “Dub” and his next-door friends, Larry and Lee. They would imitate Elvis Presley’s actions and would sing “flip top” box which was a commercial for Marlboro cigarettes.”

“My son, Arthur, was in the Vietnam war in 1966-67. He was on an aircraft carrier, USS Hancock, and was a gunner’s mate. We were living in Salina. I remember he called from Singapore and told the operator to reverse the charges and charge my phone in Salina. It was around $54. I worked for Southwestern Bell and they normally paid my phone bill, but they didn’t write that one off.

“When he came back, we were having a work stoppage strike. I told him to call 913101, the long-distance test board in Salina. He tried to call home and had no answer. He tried 913101 and got a hold of me as the man knew I was in charge of the long-distance equipment at the phone company.”

“Rod (Cecelia’s husband) was working at Cape Canaveral in Florida and we lived in Denver at the time. We were going home for Thanksgiving and were going through Dallas. We stopped to eat at a restaurant, and it came over the loudspeaker of the assassination. Our son, Darcy, about 7 years old said, ‘If some man can shoot the President in Dallas can they shoot us?’ We were on the street that it happened, as this street was the highway where we needed to be to go to Oklahoma first to meet family members.

“When we slowed down and got a paper there was a map and I said to Rod really loud, ‘Oh my gosh, we are on the same street that the President’s caravan went on when he was shot.’ All the stores were closed, the traffic was at a standstill, every person we saw was weeping. We were almost out of gas and finally traffic moved enough to get to a filling station. We looked over and the window to the Texas School Book Depository was still open. It gave me a creepy feeling.

“After we got gas, the radio was on and it was reported that JFK’s body had landed at Andrews Air force Base, and that was how long it took us to get through the city. A newspaper boy already was selling newspapers of the shooting. We still have it in the family.”

“The bombing of Pearl Harbor occurred when I was in our small-town drugstore having a coke with my high school girlfriend and talking about our futures. Mine was to be a truck driver or a bulldozer operator for Peter Kewitt construction in Omaha. Instead, my parents insisted I follow family tradition by attending the University of Nebraska, where mom and dad graduated in 1906.

“While a freshman at UNL, I joined the Marines, was called up by the Marines at the end of the semester and sent to boot camp at the infamous Parris Island, S.C. After boot, I was sent to Camp Lejeune, N.C. Leaving unimportant blanks, I jumped through endless hoops and wound up qualifying for the Marine Corps Academy at Quantico, Va.

“Unlike other military academies who school cadets there, the Marines ‘farm out’ their cadets. I was sent to Northwestern University for three semesters of engineering. From there, I was sent to Penn State for three trimesters, where I received my degree and returned to Quantico to finish the military portion and receive my commission. From Quantico, I returned to training and replacement battalion at Lejeune.

“I really owe it all to Pearl Harbor, the Marines and lots of good luck. I came close to being a truck driver or a dozer operator, both of which I love doing and both of which I have done for a local contractor friend on weekends and vacations. This Pearl Harbor bit keeps on tumbling to my meeting Helen, being recalled for more war experience and winding up at the Presbyterian Manor where I have met wonderful friends.

“The bombing of Pearl Harbor probably had the greatest impact on Helen's and my future. Helen found work as a secretary at a naval ammunition depot at St. Julien's Creek, Va., and that's where I found Helen, being there myself as part of a Marine Corps guard detachment. I'm not sure I was exactly what Helen was looking for in the way of fame and fortune, but that is what she wound up with.

“Anyway, it's been an enjoyable 73 years together, capped by a wonderful continuation of ‘the good life’ here at Presbyterian Manor. All this was brought about as a result of the Pearl Harbor bombing.”

PHOTOS: At the very top, left, are Cecelia and Rod Anderson. On the right is Art Adams. The bottom photo shows John Smutz.

Posted on
May 21, 2019
by
Cindy PMMA
filled under
Residents
Nostalgia
« Back to Blog