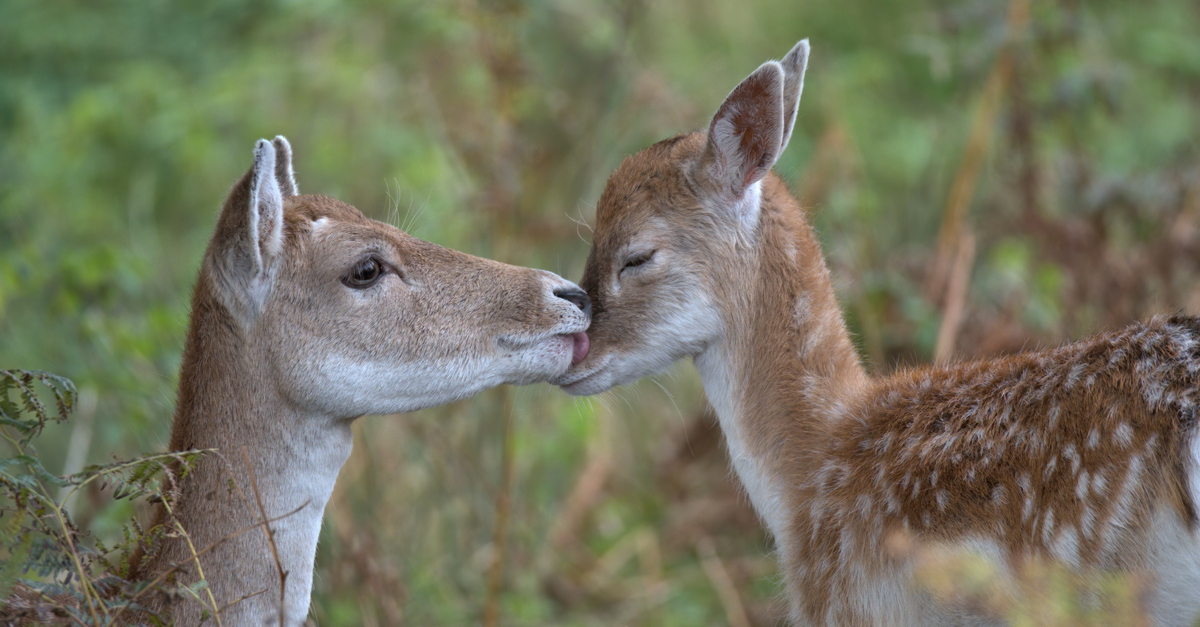 A note from Chaplain Mary:

At the present time, I am vacationing in Alaska with my husband. I would like to share with you this article by my favorite author, Joyce Rupp, for my September article. Blessings to all, Chaplain Mary

Within 20 minutes after settling into one of the comfortable cabins at the Cedars of Peace forest in the hills of Nerinx, Kentucky, I looked out the screened-in porch, amazed at what I saw. A spotted fawn on unsure legs wobbled nearby, the muscular mother nudging the baby from behind, apparently encouraging the slowly-moving infant to explore her new territory. After some time, the doe touched the nose of her newborn. The fawn then turned to wander in tall weeds near the cabin, eventually plunking down in the patch. With the fawn safely hidden from view, the doe departed.

As I watched the freshly-born creature snuggle in her safe place, perking her tiny ears up from time to time, I wondered when the mother would return. Five hours later, the doe still had not come back for her child. I thought, “What kind of parenting is that?” and worried about the fawn’s safety as I fell asleep. In the middle of the night, a bleating cry in the heavy darkness awakened me—the fawn calling for her mother. In the morning, both were gone.

After describing this scene to my friend, Mary, she asked, “So, what do you think is the meaning of that?” I replied, “I don’t know. I hope it will eventually be clear.” A week later, the “meaning” arrived. Past experience has taught me that the discovery of insight and understanding requires a certain amount of patient waiting, along with not trying to figure things out. Awareness and understanding ultimately surface only after “letting go.”

The cabin scene also re-taught me that not only does an implicit wisdom reside in myself and other human beings, it also exists in creatures. How did that little fawn know to hide herself in the weeds? How did she understand the danger and necessity of staying put? Was there an unspoken code given by the doe? The mother also contained an internal understanding. She had to care for her fawn but also restore herself after giving birth, to feed and rebuild her strength in order to nourish the waiting child. Some creaturely, instinctual wisdom provided each of the deer with what they needed.

Like the doe and the fawn, we have our own indwelling wisdom. The wisest answers usually do not come from specific, provable “facts” but from an intuitive, trustful part of us. This reality can seem especially perplexing or doubtful when we wander like a newborn fawn, wondering what direction to go with life’s uncertainties, with issues such as strained relationships, tedious jobs, parenting tensions, later-life diminishment, and societal gloom.

As a writer, I’ve learned to wait for indwelling wisdom and insight to be revealed. Sometimes I wait a long time for greater clarity. Eventually, this gift comes, maybe through conversation with another or in something I read. At other times, journaling, quiet meditation, or a walk in the woods frees the imprisoned perception.

We all contain wisdom. We have what we need to make good choices, live peacefully, and express the best of who we are. What wisdom has recently arrived for you?

Posted on
August 13, 2019
by
Cindy PMMA
filled under
Devotion
« Back to Blog