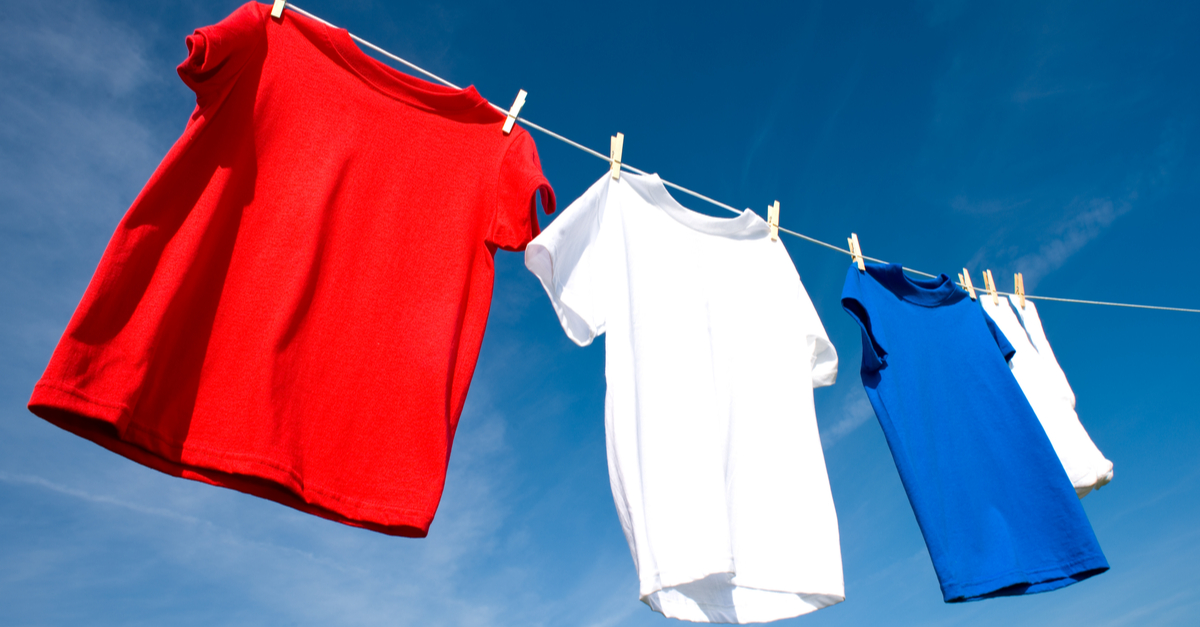 Mary's Musings: What's on the Line for You?

If you search "Independence Day" with Google, this is the information you will get from timeanddate.com:

The first description of how Independence Day would be celebrated was in a letter from John Adams to his wife Abigail on July 3, 1776. He described "pomp and parade, with shows, games, sports, guns, bells, bonfires, and illuminations" throughout the United States. However, the term "Independence Day" was not used until 1791.

How do you celebrate the Fourth of July or Independence Day? For 22 years, my husband and I hosted a family reunion for his family in the family home, which we had purchased and renovated. The first one in 1988 was also a work party and we shingled the house, worked on our new garage and various other projects.

As siblings, cousins, second and third cousins gathered, we loved and laughed together, sharing our joys and our sorrows, celebrating anniversaries and other special life events. As many came from large cities and places fireworks weren’t allowed, we had a huge fireworks display. While in Colorado recently for family graduations, we spent a lot of time reminiscing about our reunions and the unique bonds they created in several generations plus tons of forever memories.

Returning home, life got crazy as it often does in our large extended families. In one week we had a funeral and brought Kenny’s brother to a nursing home here in Salina. It’s the first time in more than 61 years that they will be living in the same town. Kenny’s oldest niece, who was recently diagnosed with ALS, also had to move to a care community, and our great-grandson is moving to Texas. My head is just spinning. So many changes. But in reality, life is about change. Some changes make us happy and other changes really cause us to struggle.

Then I received this poem from my high school pen pal. It reminded me of my childhood, which also reminds me that life is change. One blessing of change is that it can give us the opportunity to revisit memories. I smiled as I was reading the poem as I saw my mom in the backyard hanging up the laundry. Back then, backyards weren’t fenced and little did we realize that the simple job of hanging out the laundry exposed our lives to the neighbors and all those driving by.

A clothesline was a news forecast to neighbors passing by.
There were no secrets you could keep when clothes were hung to dry.

It also was a friendly link, for neighbors always knew,
If company had stopped on by to spend a night or two.
For then you'd see the fancy sheets and towels upon the line;
You'd see the company tablecloths, with intricate design.

The line announced a baby's birth to folks who lived inside,
As brand new infant clothes were hung so carefully with pride.
The ages of the children could so readily be known
By watching how the sizes changed, you'd know how much they'd grown.

It also told when illness struck, as extra sheets were hung;
Then nightclothes, and a bathrobe too, haphazardly were strung.
It said, "Gone on vacation now," when lines hung limp and bare.
It told, "We're back!" when full lines sagged, with not an inch to spare.

New folks in town were scorned upon, if washing was dingy grey,
As neighbors raised their brows and looked disgustedly away.
But clotheslines now are of the past, for dryers make work less,
Now what goes on inside a home, is anybody’s guess.

I really miss that way of life; it was a friendly sign,
When neighbors knew each other best by what was on the line.

Posted on
June 16, 2019
by
Cindy PMMA
filled under
Spiritual Life
« Back to Blog