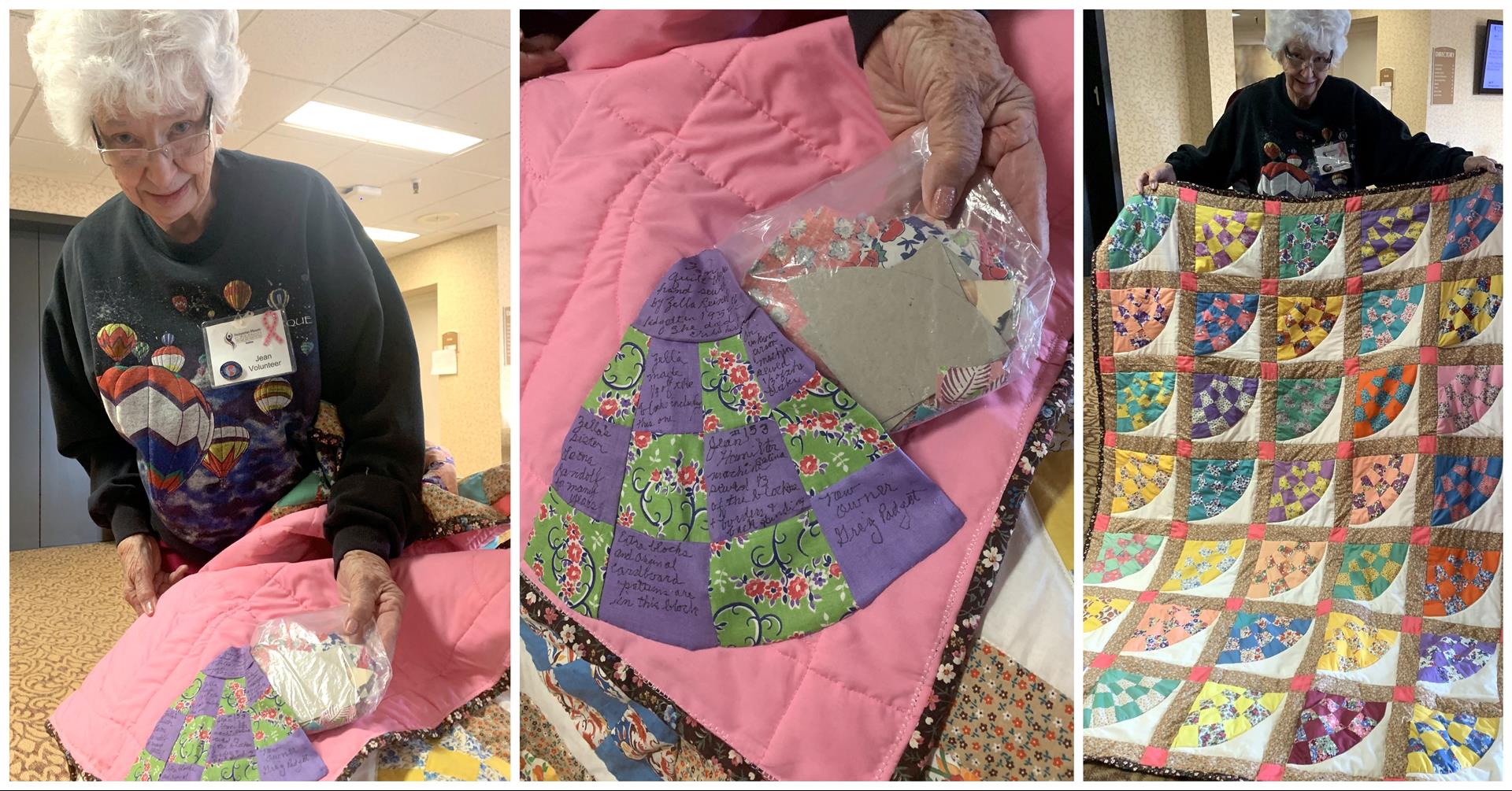 In 1955, Leona Randolf’s sister Zella began hand-stitching a fan quilt. She completed a third of the blocks before going into labor with a son. Tragically, Zella died in childbirth.

Eventually, the quilt pieces came into Leona’s possession. In addition to the blocks Zella made, an unknown needleworker had machine-stitched more blocks using Zella’s cardboard pattern.

A resident of the assisted living neighborhood at Salina Presbyterian Manor, Leona kept the box with the partially finished quilt for years. Then she met Jean Hamilton, a veteran quilter who lives in one of the tower’s independent living apartments. The two women got to know one another over dinner in the dining room.

“She heard that I quilt, and she told me she had a quilt partially made and wondered if I would finish it,” Jean said.

Jean began the project of finishing the quilt on January 8. She machine-stitched the final third of the 42 blocks needed for the quilt and placed each block. Then Jean used her own fabric for the sashing and the back. Some of the blocks weren’t finished with white fabric, but Jean was able to match the color with some fabric from her own stash.

Jean’s final touch was to turn one of Zella’s hand-pieced blocks into a pocket, on which she wrote the story of the quilt. Tucked inside the pocket are the original cardboard stencils and some leftover pieces.

Included on the back of quilt is the number 153, because it is the 153rd large quilt Jean has made.

She has completed one T-shirt quilt already this year and was working on another at the time of this writing.

“I can make about every kind of quilt there is,” said Jean, who is a charter member of the Kansas Quilter’s Organization.

Jean completed Zella’s quilt on March 21, after Presbyterian Manor canceled gatherings. However, a few days beforehand, Jean was able to share the nearly finished quilt with Leona and her family, who had gathered for a visit.

A staff member brought the completed quilt to Leona. She will pass it on to her nephew, Greg Padgett. After 65 years, he will be given the quilt his mother began before his birth.

Posted on
April 24, 2020
by
Cindy PMMA
filled under
Residents
« Back to Blog