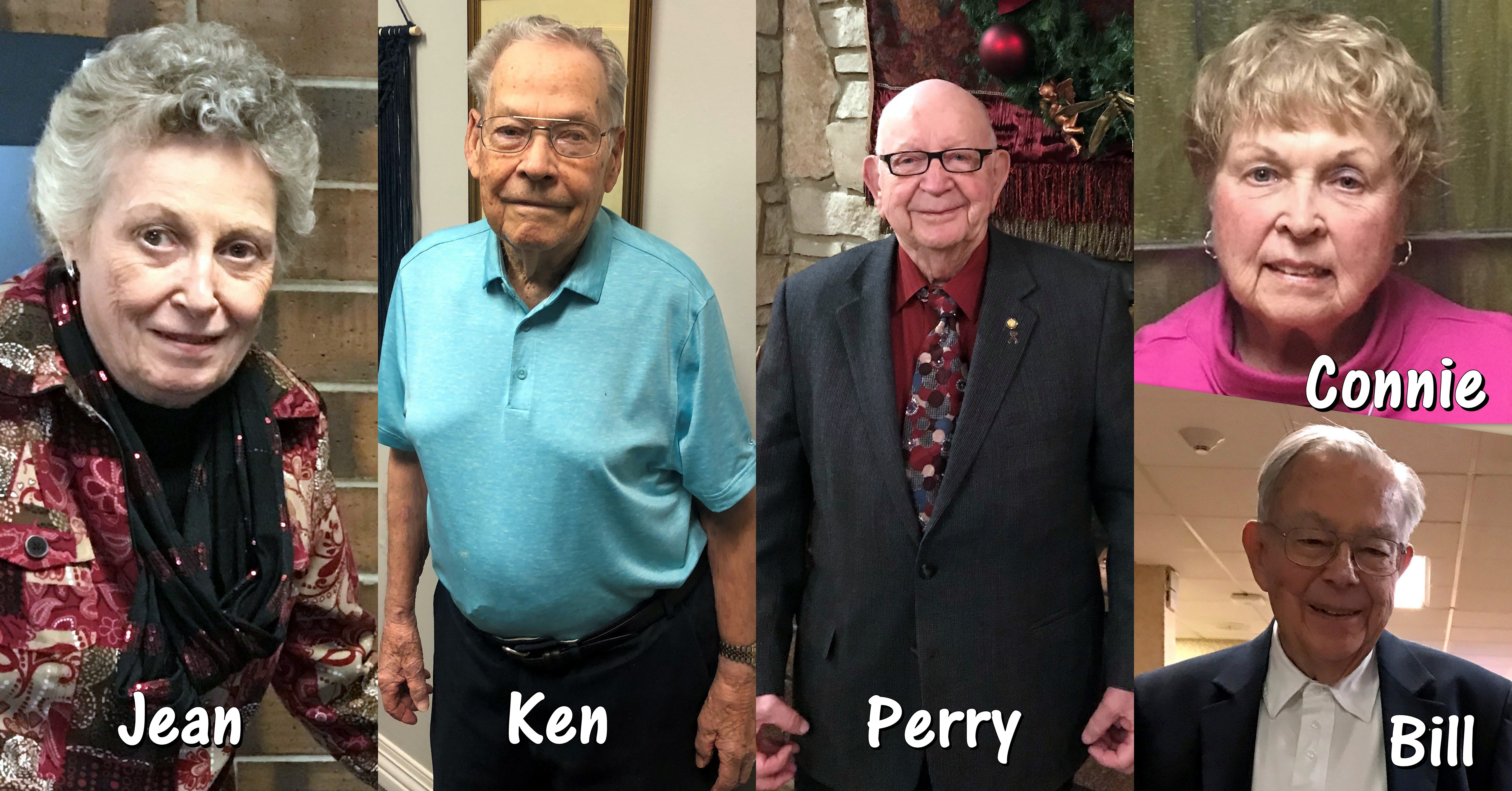 Even decades later, most of us cherish yuletide memories from childhood. To celebrate the season, five Salina Presbyterian Manor residents shared memories of their Christmas traditions with us.

During the dust bowl days, we could not afford a Christmas tree, so one of my brothers brought in a giant tumbleweed. We called them “Russian thistle.” We decorated the thistle with home-made ornaments and a wheat cross on top. It was a special treat to see that Christmas bush. Our Christmas gift was a few pieces of candy on our plate in the kitchen.

When I was a little girl, I would wake up on Christmas morning and Santa Claus would be at the foot of my bed. Santa never talked, just danced and jingled bells. Usually he brought a gift from my friends Mary and Sue Connell. Mother would tell me that he stopped first at the Connell's home and that Santa brought their gift with him.

I asked my father if I could go with him to take Santa to his sleigh. I wanted to see his reindeer. Daddy would always explain that he was only going to take Santa to another child's home, and the sleigh and reindeer were parked way out in the country. As I grew older, I wondered about the real Santa.

It was a family custom to go to Sue and Mary's home on East Iron in Salina for dinner on Christmas night. One of those times I went into the bedroom and Santa's red suit was laying on the bed. At last I knew why Santa never talked: my Santa Claus was Mary Connell.

Years later when we would drive down East Iron Avenue, I would point out the Connell home to my children and grandchildren and tell them that was where Santa Claus lived. I am sure they thought I was rather strange! But, you know I still believe in Santa Claus. He lives on today in my heart and in my precious memories.

Santa Claus made his visits after bedtime, unseen. There were empty stockings with names of each. Seasonal oranges, hard candies, peanuts and other nuts were put in the stockings. We ate cranberries, candied dates and pickles from sauce dishes. We drew names to exchange gifts. Breakfast followed with waffles, cream cheese and fruit marmalade.

We put up our Christmas tree a week before and placed a wreath on the front door. Greenery and lights were put over the front porch steps. Our kids hung their stockings on the fireplace on Christmas Eve. We attended church service Christmas Eve and then came home to eat oyster stew.

On Christmas morning, we opened our gifts after breakfast. Our Christmas dinner always consisted of turkey, yams, mashed potatoes, cranberry sauce, dressing, green bean casserole, pumpkin pie and creamed corn. All this followed by a nap! We celebrated the 12 days of Christmas and took the tree and decorations down on Epiphany.

Mother made a big production out of holidays and birthdays, even though it was during the Depression. She must have saved egg money and cream money for months, because we always had several gifts each under the Christmas tree. Even though they were mostly practical gifts like scarves, snow boots, sweaters and socks, we usually had a surprise gift or something we really wanted. There was always a big coconut still in the husk under the tree, plus a bag of oranges (rare in the winter), peanuts, and candy.

One evening during Christmas break, dad would cut the husk off the coconut and saw it in half with a hack saw. We three children would share the small amount of coconut milk and mother shredded the coconut for all of us to eat.

One of my best gifts was a hot water bottle to be filled with hot water to warm my feet at night, as our bedrooms were not heated. I had been using sod irons heated and wrapped in newspaper. Even though we had no electricity for lights, the Christmas tree was always big and beautiful — or least I remember it that way. Christmas morning was exciting!

Posted on
November 24, 2020
by
filled under
Residents
Holidays
« Back to Blog